OUTR has been published in this months RMIT news for their Lake Tai Masterplan Project in Jiangsu provence in China.
http://rmit.net.au

A radical urban model, produced by RMIT University Landscape Architecture researchers, is on display at Docklands as part of the Australian Davos Connection's Cities Summit, opened by Prime Minister Kevin Rudd.
Developed for the Chinese government, the self-sustainable model uses the Jiaoshan Islands at Lake Taihu in China as a live test case. It aims to operate as a closed system disconnected from the grid, yet remain simultaneously open to multiple conditions of change.
Landscape Architecture Program Director and research leader, Rosalea Monacella said: "The model is to have the ability to generate its own alternative and renewable energy source and self-sustained supply network.
"It will also manage, utilise and recycle its own sewage and waste, and supply its own water through systematic collection, regeneration, storage and distribution."
The project is produced by the Office of Urban Transformations Research (OUTR), a network of RMIT professionals, for Wujin Taihu-Bay Tourism Resort Commission, Changzhou Municipality, China.
"OUTR considers urban development through virtual and physical modelling in order to explore possibilities for how we might approach states and scales of change in our contemporary cities," Ms Monacella said.
The network considers the impact of economic, social, environmental and political forces in the generation of new urban masterplans that take into consideration the spatial implications of the transformation of cities.
The Australian Davos Connection Cities Summit is being held at Victoria's first heritage-listed building to be refurbished to a 5 Star Green Star office design standard, the Goods Shed North, home to the State Government's sustainable urban development authority, VicUrban. 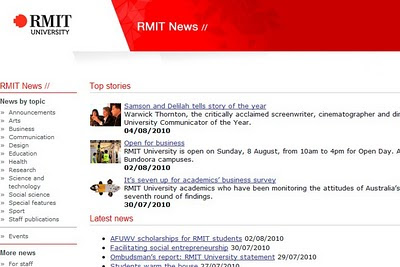