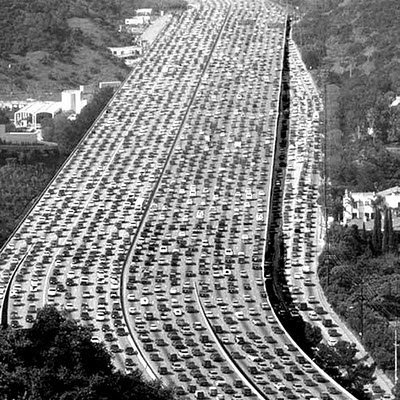 Nine day traffic jam. That’s right, a traffic jam on a road leading into Beijing now stretches more than 60 miles and is entering its ninth day. Traffic on the Beijing-Tibet expressway slowed on August 14 after a surge in traffic from heavy trucks carrying cargo into the Chinese capital. Five days later road maintenance began, compounding the congestion problem further. According to a state-run newspaper, the monumental slowdown led to the creation of an opportunistic local economy; merchants began selling food and water to stranded motorists at wildly inflated prices.

Surely at this point the traffic jam is close to letting up, right? Not so fast. According to state media the congestion is expected to continue until workers finish up the construction projects on September 13.

The tale of the traffic jam is amusing, but it highlights a serious problem in what is now the world’s second-largest economy. After years of booming economic growth China has outgrown its current system of roadways and rail lines, and the country’s infrastructure is in desperate need of some not-so-minor upgrades. The lack of sufficient infrastructure is quickly becoming a bottleneck in an otherwise promising economic machine. If the Chinese government fails to supply citizens with a sufficient standard of living, it risks choking off the move from rural areas to China’s cities. Even worse, lack of satisfactory infrastructure could prompt social unrest, one of the few threats to the power of the ruling Communist party.

Part of China’s infrastructure woes relate to a surge in automobile ownership in the emerging market. China supplanted the U.S. as the world’s largest automobile market in 2009 aftervehicle sales jumped nearly 50% over the previous year. Despite that tremendous growth, the pace is expected to accelerate further in the future. Currently there are about ten motor vehicles per 1,000 people in China; in the U.S. that figure stands north of 750.

Ongoing urbanization is another ongoing trend that will further highlight China’s need for massive infrastructure spending. At present, only about 40% of China’s population lives in cities, compared to more than 80% in the U.S. But China is quickly catching up; the rate of urbanization is more than double the comparable metric for the U.S.

China is taking steps to address its infrastructure problems. About 45% of the recent $580 billion stimulus plan was earmarked for railways, highways, and power grids, with another big slug (nearly 10%) allocated to rural development and infrastructure projects. Whether that will be sufficient to begin unclogging roads and streamlining transportation around the country remains to be seen. But judging from the recent backup heading into Beijing, there is a long way to go before China’s infrastructure problems are solved.

As China continues a push to increase its importance on the global stage, the country has generally been proactive in eliminating potential roadblocks. Agricultural independence has long been a point of pride, and in recent years Chinese firms have become increasingly active in the acquisition of international oil and gas firms. So it seems likely that Beijing will address infrastructure issues as well in order to entice rural Chinese to the cities and continue the impressive rise of the middle class.

Written By Michael Johnston From ETF Database and ETF Dailynews 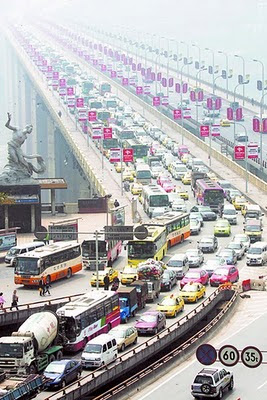