Sao Paulo running out of water!!! Is now below DEAD level!!!

Recently (over the summer), we have been keeping an eye on the drought that is occurring in the South American city of Sao Paulo, Brazil. 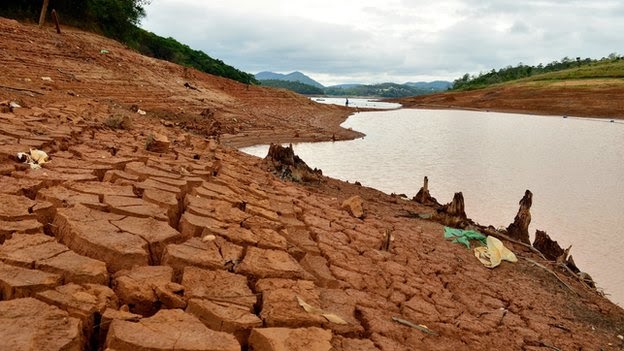 "Brazil drought: Sao Paulo sleepwalking into water crisis, Nov 2014"
http://www.bbc.com/news/world-latin-america-29947965 Above image is from the BBC.

To put it simply and with no exaggeration, this city of some 22 million Est people will run out of water if rain is not forthcoming in the next two to seven months. Perhaps even as much of a concern, is that roughly about 80% of the electricity is sourced from Hydro Electric Reservoirs, and no doubt is adding to the economic pressure the country is currently under which has been due to their "Economic Heart"(Sao Paulo State), now being crippled by these combined factors.

The text below has been reposted from https://www.stratfor.com/analysis/sao-paulo-drought-could-benefit-brazil  (please go via the link, to read their full story, or google 'Sao Paulo water shortages' for more)

The worst drought in nearly a century continues to plague Sao Paulo state and neighboring Rio de Janeiro and Minas Gerais states in southeastern Brazil; the nearly 30 million people living in the extended municipal complex of Sao Paulo have been dealing with extremely low reservoir levels for more than a year. In fact, the water reserves have fallen so low that they are now below the dead level, the point at which the water must be pumped up to reach the pipes connecting the reservoir to the greater distribution system. In late 2014, the Cantareira system authorized the use of its second quota of dead volume. The system is at roughly 5 percent of its capacity and is considering authorizing a third quota. If usage continues and the reservoir is not replenished, projections indicate that it will run dry by September. Other reservoirs supplying the city have also declined over the past year, including the Alto Tiete, which like Cantareira has approved the use of its dead volume.