OUTR have successfully submitted two projects into the AILA 2016 Landscape Architecture Awards. We got recognised in both categories bringing home two awards!


Research, Policy and Communications Award ~ for Nature's Cathedral
The winner of the Pop Up Park Competition for the IUCN World Parks Congress in Sydney November 2015, this project is a potent propaganda piece advocating the importance of parks in our cities for the wellbeing of their inhabitants. It also eloquently represents the fraught relationship of nature and culture in parks whereby nature is simultaneously celebrated and constrained by culture. The construction comprises a 21m x 16m x 6m high scaffolding armature (culture), its Latin cross floor plan signifying a cathedral, within which are suspended six Evergreen Aldars (nature). It is both supremely poetic and provocative, giving the observer or occupier pause to consider the place of vegetation in the city and the nature of trees, as well as providing sheer aesthetic pleasure.

The root balls of the trees are wrapped, with some exposed roots below, and there are IV drips hanging from the armature feeding the trees, while mounds at the base suggest the forest floor. The whole is redolent with visual metaphor as well as aural, with sounds of nature piped through and, no doubt, olfactory stimuli from the plants. This highly charged and multivalent work stems from a strong and clear conceptual base and is overlaid with elements of surprise and delight. One imagines that it must have been a joyous feature of the World Parks Congress. Communities Award ~ Get Sunflowered
‘Get Sunflowered’ is a community engagement project in the Latrobe Valley generated and managed by the OUTR Lab in collaboration with artist Ben Morrieson, community groups, industry, and local government. Its core premise was to empower local communities to take control and transform redundant, unloved, spaces into designed fields of bright joyful sunflowers.
The team describes ‘Get Sunflowered’ as a ‘ground-up temporal community landscape’ in which ‘The beautiful sunflowers are the happy by-product of the real project aspiration to connect the fragmented community, and enable local citizens to understand how they can be active agents of change in shaping and transforming their own city’.
The Jury unanimously supported this project for the its powerful simplicity of its intent, concept and execution. The Latrobe Valley is a collection of disadvantaged communities maligned for their connection to the brown coal industry and social demographic issues. The project brought these people together to plant, weed, water and connect, and culminated in a party on each site bringing thousands of people together to party among the fields of sunflowers with local live music, food and entertainment. 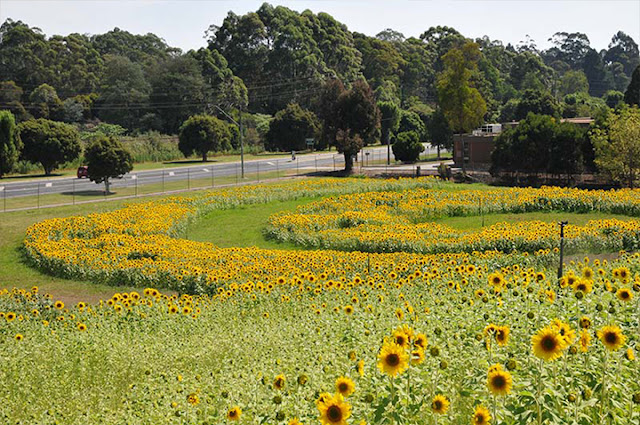